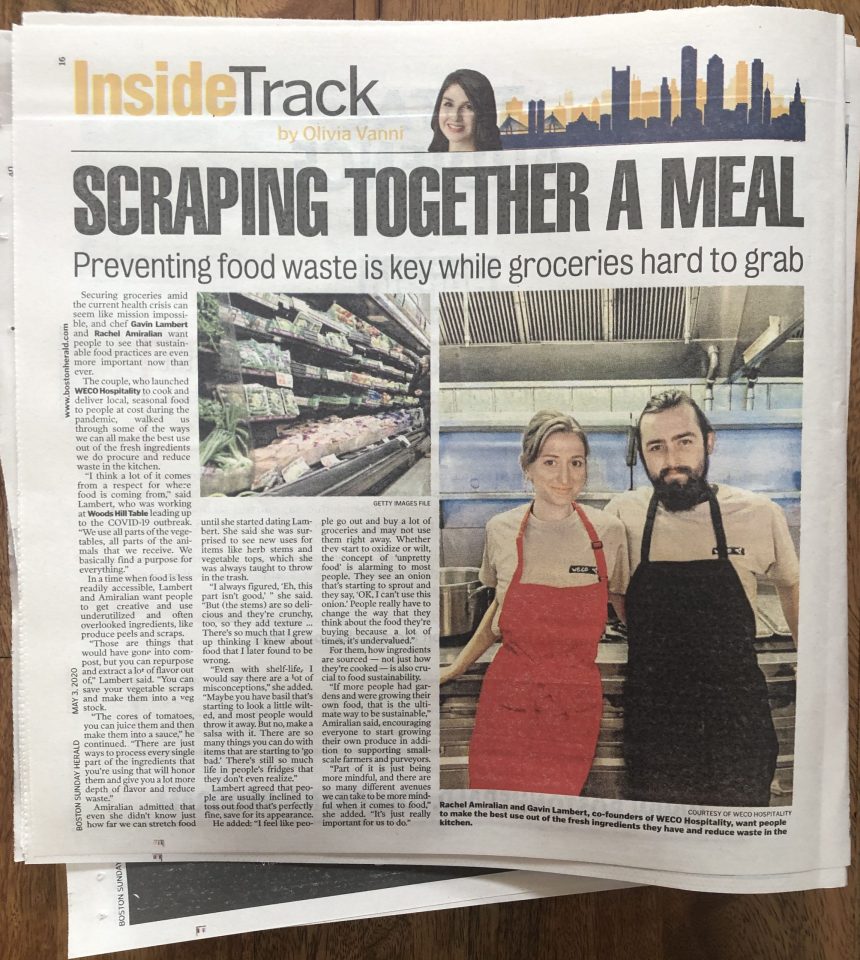 Securing groceries amidst the current health crisis can seem like mission impossible, and chef Gavin Lambert and Rachel Amiralian want folks to see that sustainable food practices are even more…

Securing groceries amid the current health crisis can seem like mission impossible, and chef Gavin Lambert and Rachel Amiralian want folks to see that sustainable food practices are even more important now than ever.

The couple, who launched WECO Hospitality to cook and deliver local, seasonal food to folks at cost during the pandemic, walked us through some of the ways we can all make the best use out of the fresh ingredients we do procure and reduce waste in the kitchen.

“I think a lot of it comes from a respect for where food is coming from,” said Lambert, who was working at Woods Hill Table leading up to the COVID-19 outbreak. “We use all parts of the vegetables, all parts of the animals that we receive. We basically find a purpose for everything.”

In a time when food is less readily accessible, Lambert and Amiralian want people to get creative and use underutilized and often overlooked ingredients, like produce peels and scraps.

“Those are things that would have gone into compost, but you can repurpose and extract a lot of flavor out of,” Lambert said. “You can save your vegetable scraps and make them into a veg stock.

“The cores of tomatoes, you can juice them and then make them into a sauce,” he continued. “There are just ways to process every single part of the ingredients that you’re using that will honor them and give you a lot more depth of flavor and reduce waste.”

Amiralian admitted that even she didn’t know just how far we can stretch food until she started dating Lambert. She said she was surprised to see new uses for items like herb stems and vegetable tops, which she was always taught to throw in the trash.

“I always figured, ‘Eh, this part isn’t good,’ ” she said. “But (the stems) are so delicious and they’re crunchy, too, so they add texture … There’s so much that I grew up thinking I knew about food that I later found to be wrong.

“Even with shelf-life, I would say there are a lot of misconceptions,” she added. “Maybe you have basil that’s starting to look a little wilted, and most people would throw it away. But no, make a salsa with it. There are so many things you can do with items that are starting to ‘go bad.’ There’s still so much life in people’s fridges that they don’t even realize.”

Lambert agreed that people are usually inclined to toss out food that’s perfectly fine, save for its appearance.

He added: “I feel like people go out and buy a lot of groceries and may not use them right away. Whether they start to oxidize or wilt, the concept of ‘unpretty food’ is alarming to most people. They see an onion that’s starting to sprout and they say, ‘OK, I can’t use this onion.’ People really have to change the way that they think about the food they’re buying because a lot of times, it’s undervalued.”

For them, how ingredients are sourced — not just how they’re cooked — is also crucial to food sustainability.

“If more people had gardens and were growing their own food, that is the ultimate way to be sustainable,” Amiralian said, encouraging everyone to start growing their own produce in addition to supporting small-scale farmers and purveyors.

“Part of it is just being more mindful, and there are so many different avenues we can take to be more mindful when it comes to food,” she added. “It’s just really important for us to do.”

We’re Rachel and Gav, and we love to cook. We started WECO HOSPITALITY because of the current pandemic. For us, like many others, our careers have been put on hold. However, now more than ever we need to stick together, so we decided to offer a service that not only feeds our passion but feeds you too.

FacebookInstagram
More from WECO
WECO NEWS
WECO
JOIN OUR MAILING LIST
We email our menu to our subscribers before we post it to the public. Sign up to be the first to know.
Copyright WECO HOSPITALITY - site by RiverVisions
×