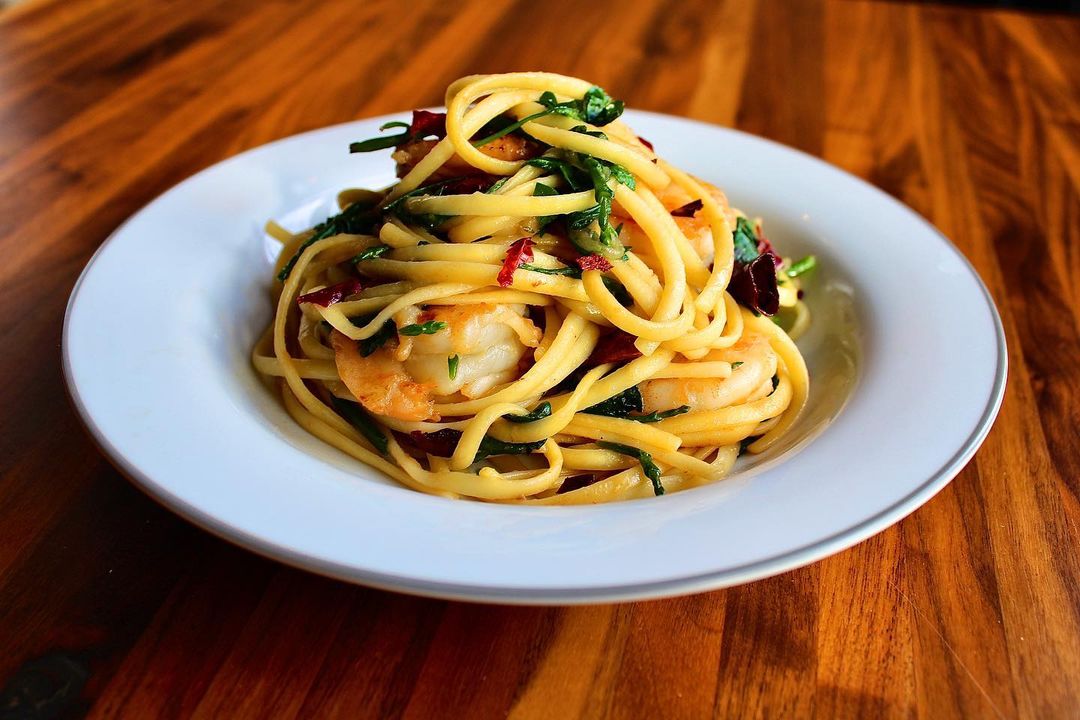 It’s been a while since we have done a dairy-free pasta. Actually, now that I think about it, I’m not even sure we have. So often are pastas associated with rich, cream and butter based sauces- but it doesn’t have to be that way. I spent some time in Rome several years ago, and besides cheese (obviously), the pasta dishes I ate there were made sans dairy for the most part. And to be honest, I struggle to find anything as good as those pastas. Maybe that’s just the nostalgia talking, but they were really, really delicious. The secret? Good olive oil. Such a simple ingredient can go a long way. For tonight, we used Spanish olive oil (obviously, gambas…), which is not too bitter or acidic, but still has those amazing floral and pungent notes that go so well in a pasta. Coupled with the aromatics and herbs, some crunchy sea beans, and fried chiles, it’s a hit. Wash it down with some broccoli rabe with fried garlic, and enjoy your salad for dessert. It’s the European way. I guess. I don’t know. Get in there.

Heat a big old saute pan or large pot over medium high heat. Once it’s hot, add the shrimp, stirring so it fries a bit. You want to bloom the parsley and aromatics so they pop. Once it’s nice and hot, add in your pasta, and stir until everything is coated with that olive-y goodness. Plate it up and garnish with some fresh cracked black pepper.

For the broccoli rabe:

Broil the rabe on high for a few minutes until the garlic is nice and toasty, and it’s heated through. If necessary, give it a flip halfway. I’d probably just throw this in the bowl with my pasta, but you do you.

Toss the salad in a large mixing bowl to incorporate all the fennel and breadcrumbs. Drizzle the sherry vinaigrette around the sides of the bowl, season with some salt and black pepper, and mix the leaves so they are evenly coated. Plate it up and enjoy 🙂