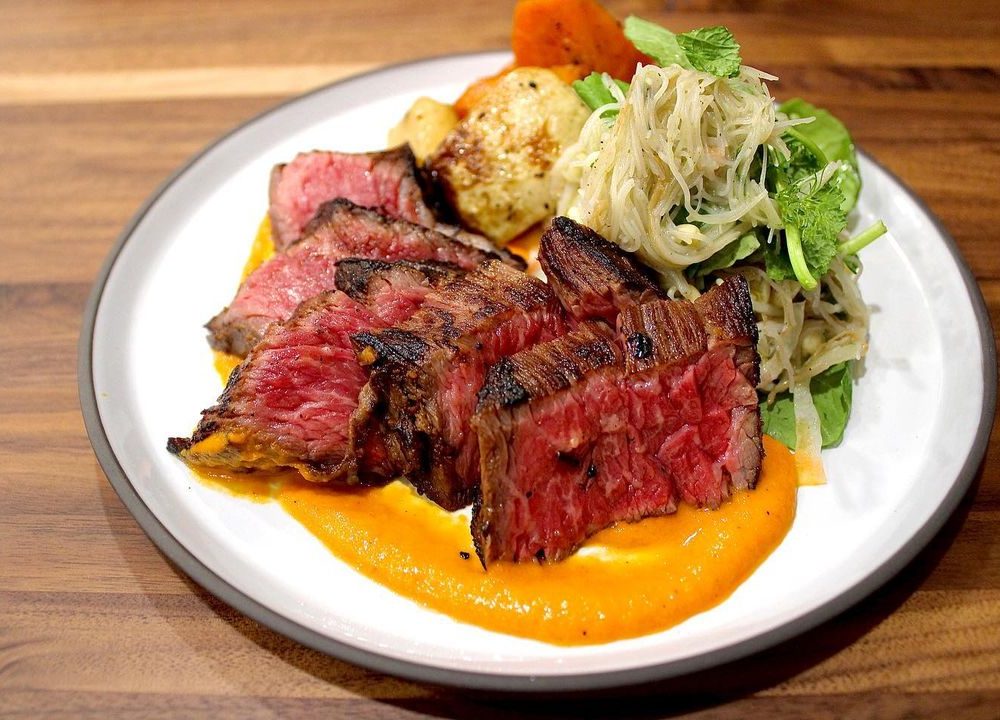 Okay so yesterday I said that pork was my favorite protein- but I think I may have to revise my answer after tasting tonight’s beef. Let’s talk about beef for a second ‘- conventional beef (supermarket) doesn’t stand a chance against what we got. I like to use grass-fed beef for some applications (braises, stews, and ground beef), but for steaks, it’s grain-fed all the way for me. The flavor and richness of the fat, and the intense marbling that you get from grain-fed cannot be beat. Bavette is a fancy name for sirloin flap. However, sirloin flap isn’t nearly as sexy sounding as “bavette”, so that’s what it’s called bavette on menus. The sirloin flap is an extension of the primary muscle groups that make up ribeye and tri-tip, and is extremely flavorful and tender. It takes a marinade very well, and reheats like a champ. Tonight’s bavette is served with a chewy and crunchy vermicelli salad, roasted carrots and root veggies, and a velvety kimchi sauce. Get in there!

Set your oven to low broil. On a sheet tray lined with tinfoil, place the pieces of bavette so that they are spaced apart, and broil them until they reach your desired temperature. The steaks are cold, so they will take some time to heat through. Keep flipping them until they are cooked to your liking. If you have a meat thermometer, here are the temp ranges for each level of doneness: rare: 120-130, medium rare: 130-135, medium: 135-145, well done: 145-155. We recommend medium!

Once they reach your desired temperature, take them out of the oven and rest them on a rack for 2-3 minutes. Slice up, and you’re ready!

For the roasted root veggies:

Once your steaks are out of the oven, blast the root veggies under the broiler for 2-3 minutes, turning occasionally so they heat evenly. Caramelization is your friend here, don’t be afraid to get them toasty!

For the vermicelli and kale salad:

Empty the contents of the container into a large mixing bowl. The noodles have marinated in the dressing and soaked up all that flavor, so no need to dress any more. Using a fork and a knife, chop up the kale and noodles a bit to incorporate everything in. Taste for seasoning, and head to the plate!

No rules here. We recommend starting with salad, then root veggies, and then laying the slices of steak on top. Don’t forget the kimchi sauce!