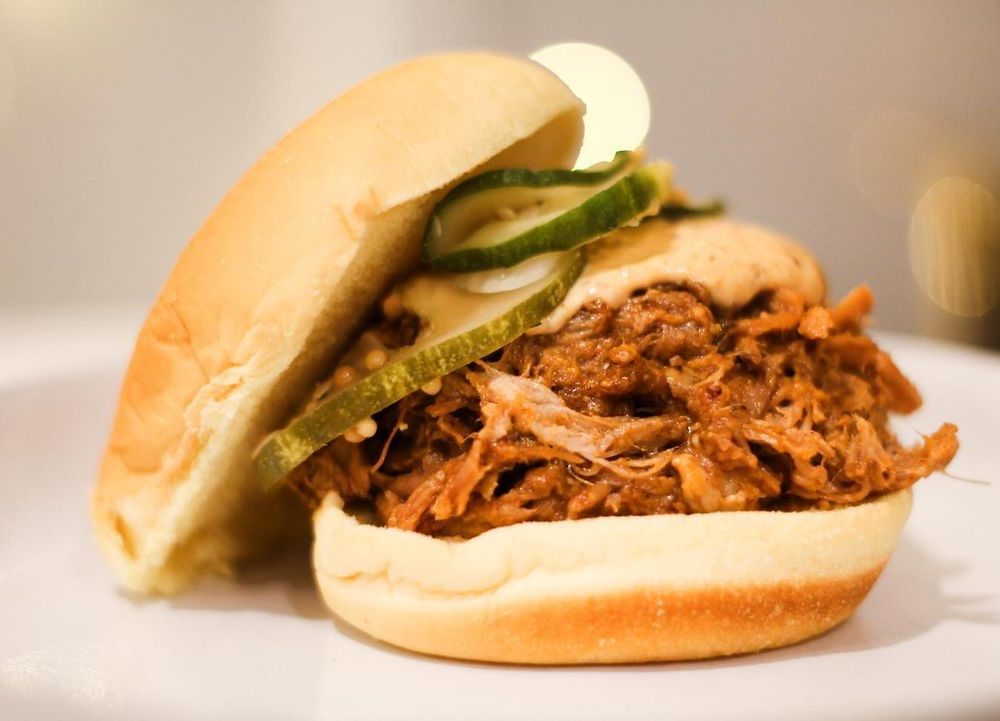 As much as I don’t like to prepare the same thing twice, there’s always a few crowd pleasers that you guys love to order whenever they are on the menu. I do keep that in mind because obviously, if we want to keep doing this, we have to put things on the menu that people like! However, I like to try to mix things up a bit. You guys love BBQ, that’s clear. And, as we found out this week, you are very excited about pulled pork sandwiches. I can’t blame you- I just had one for lunch and it’s… yeah… it’s amazing. The pickles, the secret sauce, the bun (which, by the way, I decided to use potato rolls not brioche- last minute decision, hope everyone is cool with that!)- it’s all spot on. Don’t sleep on the potato salad or green beans either- this dinner will make you feel like it’s summer, and you’re sitting at a picnic table by a lake. Certainly wish I was there right now, eating pulled pork sandwiches… I guess a man can dream. Get in there!

First step is to heat up the pulled pork. Warm the pork in a saucepot over medium high heat, stirring until it’s nice and hot. Set it aside.

Next comes the bun- now there’s two schools of thought here- to toast, or not to toast. That is the question. I personally prefer a no-toast for this kind of sandwich, but you’re in charge.

Start with the bun. On the top half, spread some secret sauce on there. Be generous!

Next, make a fat pile of bread and butter pickles on the bottom bun.

Finally, using tongs, grab some pulled pork and pile it right on top of the pickles. Close it up, and dive on in. Make sure you have plenty of napkins, it’s gonna be a messy one. If you’re not covered in BBQ sauce by the end of this dinner, you’re not doing it right.

The potato salad is ready to go, but the blistered green beans should be warmed up a bit, either in a hot pan or under the broiler. I’m going to be honest, I love green beans, and they may be my favorite part of this entire meal… let me know if you agree!